By Matthew Peterson on November 8, 2008 2 Comments 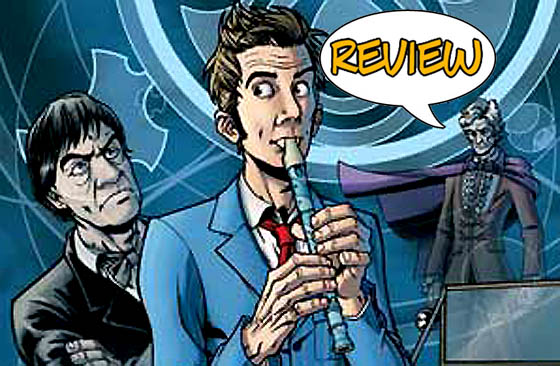 In honor of this week’s Major Spoilers Poll of the Week, we’re going to be taking a look at the latest issue of what some have called the best written Doctor Who comic ever…Â  The adventures of the Tenth Doctor are taking a bit of a hiatus on television, but those of us who want to monitor the activities of the last scion of Gallifrey can still get what they want, presuming that they’re willing to hit their localÂ comic shop.

Previously, on Doctor Who – The Forgotten:Â  Over 900 years ago, a man who some called Sigma Theta stole an out of date TARDIS from the authorities, and set out across the universe, walking various parallel Earths and having adventures, first with his granddaughter and later with an ever-changing series of companions.Â  During that time, he has used his genetic ability to regenerate his body repeatedly, changing his appearance on the cellular level every so often, and saving countless numbers of sentients from various certain dooms.Â  But now, in the midst of his 10th life, he and companion Martha Jones have crash-landed in a mysterious museum dedicated to the Doctor himself in his various incarnations.Â  With his memories mostly wiped out, the Doctor is forced to relive his own life, to remember each body, each companion, each old villain one at a time, in the hopes that he can remember enough about himself to figure out who is behind the whole mess…

At the end of last issue, the Doctor collapses, his hearts stopped, before Martha’s very eyes.Â  She quickly falls back on her medical training, providing CPR and reviving him, only have the Doctor smile wickedly.Â  “Why, Martha Jones… Did you just KISS me?”Â  She drops him on his head (not wise for a man who just stopped breathing for a bit) while the mysterious Curator hears the Doctor talking about old times, and releases an old friend:Â  an Auton.Â  While the robot heads for them,Â theÂ Doctor returns to the exhibit of him, handling the item that represents his SecondÂ self, aÂ wooden recorder.Â  As the memories flow into the Tenth Doctor, we are treated to a flashback of the Second Doctor,Â Scottish highlander Jamie McCrimmon and Zoe Herriot, on the run from monstersÂ in a strange alien base (as they were often found to do.Â  They’re captured at first, then the Doctor uses his strange charm to get them out ofÂ trouble, and ends up taking overÂ the defenseÂ efforts against a series of strange snake men.Â  Using hisÂ recorder and theÂ base’s communications systems, he manages to play a tune he learned from an Indian swami and put the snakes to bed.Â  With his memories back, Doctor Ten quickly is attacked by an Auton, and takes off at a run.

The duo hides in an alcove, and Martha gives him another relic of days past: a set of car keys.Â  “I remember a name.Â  Bessie!” cries the Doc, and Martha snarks that he must collect girl sidekicks like trading cards, but the Doctor explains the truth.Â  Bessie was the car driven by his Third self while trapped on Earth, and we get to see him in action (alongside Brigadier Lethbridge-Stewart and Jo Grant) against dog-headed aliens in mechanical spiders.Â  The Doctor starts to jury-rig a defensive device, saying “All I need to do is reverse…” before the Brigadier interrupts him with, “Let me guess… The polarity of the neutron flow?”Â  The Doctor instead reverses two wires, and turns the screwdriver into a giant dog whistle to drop the creatures in their tracks.Â  With another lifetime of memoriesto draw upon, The tenth Doctor remembers what an Auton is, and takes him out with a bottle of Nitro-glycerine (found in the backpack of Seventh Doctor companion Ace) and realizes that the common thread of his memories is communication.Â  Being a genius, he puts three lifetimes of memory together, and uses the Tardis key on the Third doctor’s keychain (and does, indeed, reverse the polarity) to send a message to the TARDIS.Â  Martha is amazed, but he simply replies, “Duh.Â  Doctor?”Â before realizing there’s no response.Â  A stunned Doctor realizes the truth…Â  “It’s gone.Â  Removed from the space and time continuum.Â  The TARDIS has been DESTROYED!”

This is a fun little issue, just as #1 was, and has lots of nice little touches (reversing the polarity, the fact that the Second Doctor’s flashback, like his episodes, is presented in black and white, Ace’s Nitro-9) for the long-term fan, but still hangs together for the new kids.Â  I expect that having the various lives of the Doctors playing out like this may actually add to the fun for those who are only familiar with the latest series.Â  I’m not as thrilled with the art this time around, though Pia Guerra nails the Second, Third, and Tenth Doctors, her Martha Jones doesn’t gel, and old-school companions Jamie and Jo don’t look at all like themselves, at least to me.Â  Still, the overall effect is impressive, the dialogue excellent, the plotting interesting, and the mysterious Curator’s (who I think is designed to make us think that he is the Master, but I suspect is not) identity is still a compelling chunk of MacGuffin.Â  We’re looking at a fun book here, even if you don’t already love the Doctor.Â  And if you do, there’s little extras baked in for you to enjoy as well.Â  Doctor Who: The Forgotten #2 gets an impressive 4 out of 5 stars.