By Stephen Schleicher on November 3, 2008 0 Comments 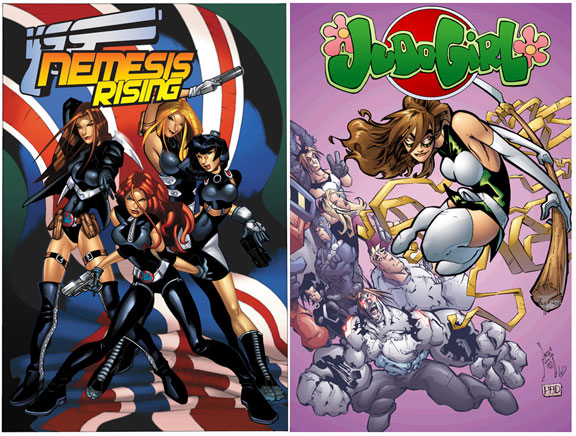 Former Alias titles Victoria’s Secret Service and Judo Girl are getting the trade treatment in December, thanks to Bluewater Productions.

Judo Girl is a woman on a mission: after having spent 40-years in suspended animation, she searches for her missing brother. And Captain Steel hasn’t exactly spent the last four decades collecting rust either.Â  Indeed, his awful plans are about to solidify on a worldwide scale. On the flip side is a retro story set during the era of go-go boots and slot cars revealing the secret origin of the original Steel Ray! Martial art meets pop art; both the modern story and the retro story tie in together for one fantastic adventure!

They say it takes a thief to catch a thief, and the glamorous field agents of VSS put this tenant to the test when they allow their newest member, the American sneak-thief Scarlet, to take point on her first full mission: hoping to derail on imminent coronation, an unknown scoundrel has stolen the Crown Jewels from the Tower of London. It’s up to Lark, Raven, Brooke, and Scarlet to steal back these vibrant symbols of the monarchy they have be paid to protect. But which of her teammates is spying on Scarlet? And why? It’s thief versus thief and spy versus spy in this high-impact thriller.

Of the two, I like Judo Girl.Â  It’s a different take on action adventure titles, with a lot of humor and some really nice art.