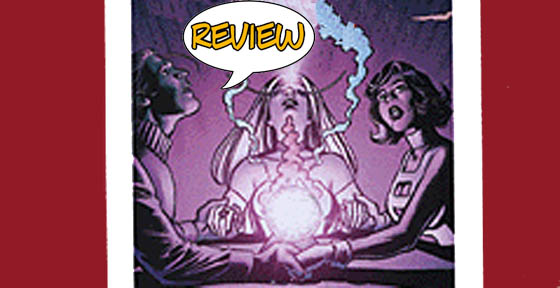 Can I just say that I HATE the vertically aligned giant theme covers for Final Crisis and Final Crisis by-products?Â  Not only is it nigh-impossible to get a decent cover scan, they have to cram whatever they’re trying to show you into 1/3 of a standard comics page, which compresses the visual information into a tiny little space and crams everything together.Â  But enough whining.Â  Legion fans and detractors alike have long complained that the logistics of a team with 25 members are impossible to coordinate, and I can certainly feel their pain.Â  This series promises THREE DISTINCT VERSIONS of most of the characters from that 25 member team, as well as the vast majority of the evil types that the 30th Century has to offer, all wrapped up into one.Â  Will it be as accessible as the first issue was?

Previously, on Legion of 3 Worlds: The United Planets has turned it’s back on the Legion of Super-

Heroes and it’s “unattainable” goal of offsetting xenophobia and racism with unity and togetherness.Â  The Legion (this being the classic pre-Crisis Legion as seen in the recent “Superman and The Legion of Superheroes” arc in Action comics) has responded the way they always seem to, but waving politely and doing the right thing anyway.Â  The team has mobilized throughout the United Planets to regroup and gather their lost members, while the menace of Superman Prime (hereafter referred to as ‘Whiny Tom Welling’) has caused them to even pull Superman forward through the timestream to help.Â  For his part, W.T.W. has freed all the superhuman inmates from Takron-Galtos (having discovered last issue that *his* example has inspired them to their heights of nastiness) in an attempt to finally created a Legion of Super-Villains that will rival the original team.Â  For the team that faces the worst Crisis ever in history every other week, this may actually be the one situation that even the Legion can’t stop…Â  which is why Superman and Brainiac 5 have a desperate plan.Â  Call in TWO MORE Legions.

This issue starts with a moment that looks vaguely familar to me, as a tiny figure floats into view, growing larger and larger.Â  “There is nothing out there,” says the winged woman as she moves closer and closer, “only the emptiness of limbo.”Â  Her insectoid wings and featureless mask reveal her to be Shikari Lonestar, the tracker from the rebooted incarnation of the Legion.Â  She tells an off-screen voice that all is not lost, that their Legion may soon be found.Â  Far away, on the Sorceror’s World, we find former Legionnaire The White Witch chained and wasting away in the dungeons of Mordru.Â  She finds herself somehow channeling the precognitive powers of her sister (Dream Girl) and viewing the future, showing visions of the Rebooted and Threebooted Legions, and Superman-Prime recruiting Saturn Queen to his own evil Legion.Â  The Time Trapper arrives, and uses his powers to keep her from being able to view what comes after, slurring “There IS no tomorrow unless the Time Trapper sees it.Â  The Witch suddenly finds her strength, raging against the Trapper, against Mordru, and flatly stating, “I’ll die before you take any more.”Â  Suddenly the wall is shattered by a giant stone fist, and the greatest Legionnaire of them all (my opinion, mind you) enters, followed by Dawnstar and Wildfire.Â  Blok gently kneels to pick Mysa up, and I tear up a little bit as she greets him.Â  “It is you…Â  My rock.”Â  And right there, they have me.Â  The stone knight carries his battered ivory princess out of the castle, while Dawnstar and Wildfire argue about “following your heart.”

As they exit the dungeon, they find their backup in the midst of a pitched battle with Mordru himself, and making a good show of it.Â  “Heads up Legionnaires,” cries Rond Vidar, “Rip Van Winkle’s home early!”Â  Rond takes the fight to the Dark Lord with every ounce of power in his Green Lantern ring, and actually manages to keep the old man off-balance.Â  “Your power is not magic, Lantern.Â  It’s the dying embers of an institution long dead.Â  Your ring is an irrelevant relic,” jeers Mordy, and Rond snarls back, “As are YOU.”Â  Vidar’s defiance only wilts a little bit in the face of a voice from above, as the new Legion of Super-Villains (numbering The Fatal Five, The Justice League of Earth, the League of Super-Assassins, the entire memebership of the OLD Legion of Super-Villains, Grimbor the Chainsman, Black Mace and more) swoops in, led by Whiny Prime Welling.Â  Unaware that their teammates are under attack, Superman and the rest of the Legion debate the merits of “redeeming” Prime, with some of the team arguing that they must KILL the kid to save the universe.Â  Team leader Cosmic Boy shuts that conversation down with authority, barking “Not NOW.Â  Not EVER.”

The situation on the Sorcerer’s World goes critical, and Rond decides that the good of the many outweigh the needs of the few, using his power ring to shove his partners through the rift that leads back home, saving their lives, but leaving him face to face with 40 of the most vicious thugs alive.Â  Prime snots something about hating Green Lanterns, and Rond again brings the John Wayne.Â  “You’ve got a lot to answer for, kid.Â  And it’ll be MY PLEASURE making that happen.”Â  At Legion HQ, Lightning Lad and Cosmic Boy nearly come to blows over the direction of the team, and Cos points out that he’s given up everything for the Legion, so the married-with-children Lightning Lad and Saturn Girl don’t have to.Â  (Night Girl is clearly seen looking sad during this little diatribe, a very nice touch.)Â  While Rond Vidar fights for his life against Mordru and the entire LSV, the team tries and fails to pull off a rescue.Â  Rond’s own father, Universo, watches passively while his son is executed by Prime, wanting only the power ring.Â  The ring escapes Universo’s grasp, flying back towards Oa, but unable to find a suitable host, while the Legion heads for a cave in Rhode Island.Â  Why, you ask?Â  Brainiac 5 needs a particular crystal globe to pull off his next trick.Â  While Superman and most of his teammates engage the evil LSV, and Mon-El delivers the body of Rond Vidar to Oa, (???) Brainiac 5, Phantom Girl, and the White Witch tap into the bleed and deliver unto the fanboys… a Legion.Â  And another Legion.

Fifty-odd heroes stand in a cave, trying to figure out what’s going on, as original Brainiac 5 tries to tell them what’s going on.Â  Threeboot Brainiac 5 snarks, “Are you kidding, grandpa?” only to have Reboot Brainiac 5.1 try to calm him down to no effect.Â  Hilariously, the assembled heroes stand and gawk as three 12th level intelligences hurl insults. (“Why don’t you just get a haircut?”Â  “I’M VERY BUSY!”Â  Ha!)Â  Tom Welling-Prime systematcially begins beating the bajeezum out of Superman, ranting that he will destroy Metropolis, the Legion, the Fortress of Solitude, every single thing that Superman ever created, loved, or inspired.Â  “The S is MY symbol now, Superman!”Â  Meanwhile, on the lost planet Oa, Mon-El and Shadow Lass seek a mysterious figure, someone that Brainiac 5 thought would listen to Mon, but when they find him, he isn’t interested in getting involved.Â  Mon asks who he is, and the figure steps out of the shadows.Â  “I am Sodam Yat.Â  I am the Last Guardian of the Universe!”

Man, that was a mouthful.Â  This issue was filled with Legion lore, little moments where my inner fanboy lit up and took notice.Â  Cosmic Boy’s reference to his relationship with Night Girl, Blok and Mysa’s sweet moment, Mordru’s history with the Witch, Wildfire and Dawnstar discussing their history…Â Â There was even a momentÂ where the Rebooted Dreamer saw the grave of the Threebooted Dream Girl and wondered if she was going to die, a nice touch.Â  The problems with the issue are in that approach.Â  Every one of the major Legion villains is represented here, and the kind of power they wield is really going to take three Legions to try and offset.Â  But I can’t imagine this is a book that’s in any way easy to understand if you’re not fluent in Legion lore.Â  Heck, I suspect that most of our Faithful Spoilerites wouldn’t know about Rond Vidars as Green Lantern if I hadn’t just Hero History’d him recently…Â  With the sheer volume of good stuff in this issue, I’m metaphorically stuffed.Â  And once that happens, no matter how good the meal was, you can’t think about eating again for a while.Â  I’m exhausted at trying to recap and review it, even as I’m greatly anticipating what’s going to happen, and champing at the bit to find out which (if any) of these Legions will still be standing at the end of the series.Â  I never have many complaints about the art of George Perez (who is getting some of the odd Gary Frank costume designs to work better for himÂ this issue) and Geoff Johns hits all the right notes with his script (though I’m not sure why Sodam Yat is here, quite frankly.)Â  Legion of 3 Worlds #2 earns a more-than-respectable 3.5 stars, for good art, a jam-packed plot, character moments galore, with the caveat that if you’re not a Legion fan, this may not be the place to try and become one…