The Shoes You Didn’t Know You Need

By Stephen Schleicher on October 1, 2008 2 Comments 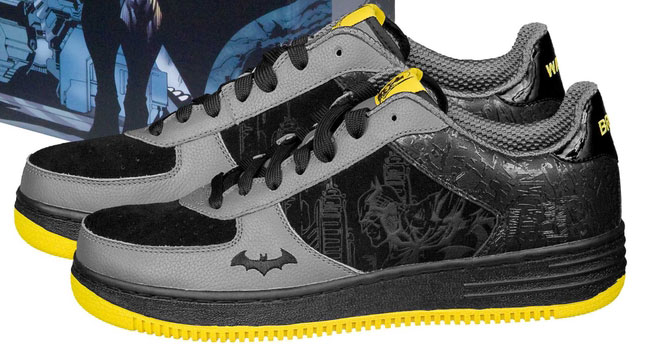 Oh Hellz Yeah!Â  Check out these limited edition DC Super Hero Shoes from Limited Soles and ACI International.Â  Sneaks that honor your favorite characters; Batman, Superman, and The Joker.Â  Yeah, I’m a bit confused on that last one, too as this is titled Super Hero Shoes.Â  But hey, BATMAN SHOES!

ACI International produced only 1,938 pairs of the Superman shoe (in homage to the year the Man of Steelâ€™s debut issue was released), 1,939 of the Batman and 1,940 of the Jokerâ€™s model â€“- each individually numbered and encased in the kind of custom packaging that sneaker snobs make a primary talking point.

As well, each pair comes kitted-out with enough comic-specific details to make fanboys swoon: the words â€œBRUCEâ€ and â€œWAYNEâ€ on the heels of the Batman shoe, an embossed silhouette of Metropolis (with the obligatory Daily Planet logo) on the heel basket of the Kryptonian model and a purple caricature of the Joker on the tongue of the criminal clownâ€™s shoe.

The site says the shoes are availabe in September 2008, but considering as how the month has already passed, these shoes – $110 a pop – are either sold out, or the company is having some launch issues.Â  In either case, I stilled signed up on the email list in hopes I can have my very own pair of Batman sneakers with the words BRUCE WAYNE on the back.

via Limited Soles and Hero Complex