By Stephen Schleicher on October 1, 2008 0 Comments

While the movie came and went, the television series on the Cartoon Network fleshes out the story even more, filling the void left by the end of the last Star Wars movie.Â  Lucas Film has sent Major Spoilers a rundown of the back to back premiere episodes and a discussion with Dave Filoni, the series supervising director.

In â€œRising Malevolence,â€ which premieres at 9:30 p.m., an attack by an unimaginably destructive weapon aboard a mysterious warship leaves Jedi Master Plo Koon and his clone troopers struggling to survive until Anakin Skywalker and Ahsoka Tano can find them. They discover that the ship is piloted by Grievous himself.

Series supervising director Dave Filoni helms the episode â€œRising Malevolenceâ€ from a script by Steve Melching. George Lucas is the seriesâ€™ creator and serves as executive producer, and Catherine Winder is producer.

â€œRising Malevolenceâ€ features several prominent series debuts, most notably those of Jedi Master Plo Koon, General Grievous and his menacing warship, the Malevolence. Also appearing for their first time in the series are Anakin Skywalker and his padawan, Ahsoka.

Plo Koonâ€™s presence was established in Star Wars: Episodes I, II and III, but his character was seen fleetingly in those films. Nevertheless, just as the seldom-seen Boba Fett became a fan favorite after The Empire Strikes Back, Filoni grew fascinated by Plo Koon. He chose the relatively unknown Jedi Master as his first project of character development.

â€œI liked the design of the Plo Koon character, and I also liked that he was a Jedi Master,â€ Filoni says of his initial attraction. â€œLike so many Star Wars fans, I had always wondered what other Jedi were like â€“ and The Clone Wars presented an opportunity to explore those charactersâ€ 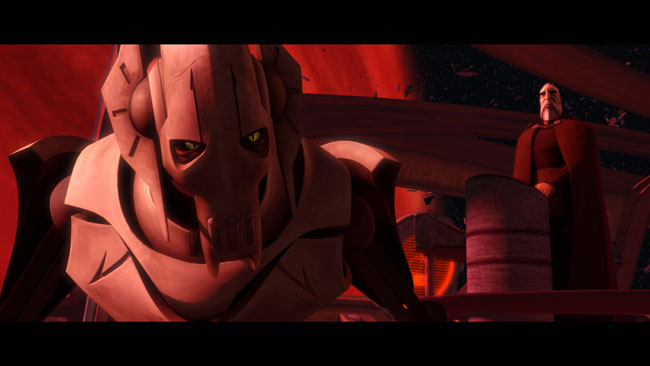 Melching said he, Filoni and script supervisor Henry Gilroy worked hard to reveal Plo Koonâ€™s character by example â€“ and, at the same time, offer greater perspective on the ways of the Jedi. Moreover, they reveal in â€œRising Malevolenceâ€ an important connection between Plo Koon and Ahsoka Tano, Anakinâ€™s Padawan learner.

â€œWe were able to examine both Plo Koonâ€™s personality and Ahsokaâ€™s background by showing their bond and the extreme loyalty of Anakin and Ahsoka to their Jedi comrades,â€ Melching says. â€œThey know heâ€™s stranded and might not be alive, but if thereâ€™s even a chance, theyâ€™re going to find him. They have to deviate from their mission to try to rescue him, but they canâ€™t endanger their larger mandate.â€

The episode offers numerous scenes of Plo Koon and a small group of clones stranded in a disabled escape pod, which Melching says offered opportunities to expand on the thoughts, sensibilities and unique attributes of each clone trooper.

â€œThe clones are really an army of one â€“ theyâ€™re all the same guy. But their experiences in the war are all different, and that affects their relationships with other clones and their Jedi leaders,â€ Melching says. â€œThey may all seem be the same guy, but theyâ€™re developing different personalities, and we work hard to show how they think, where they come from. That helps to define each episode. After all, the clones are ultimately the key to this war.â€

Attached youâ€™ll find the first official episodic image from â€œRising Malevolence,â€ and stay tuned for more information and images throughout the week leading to the series premiere.