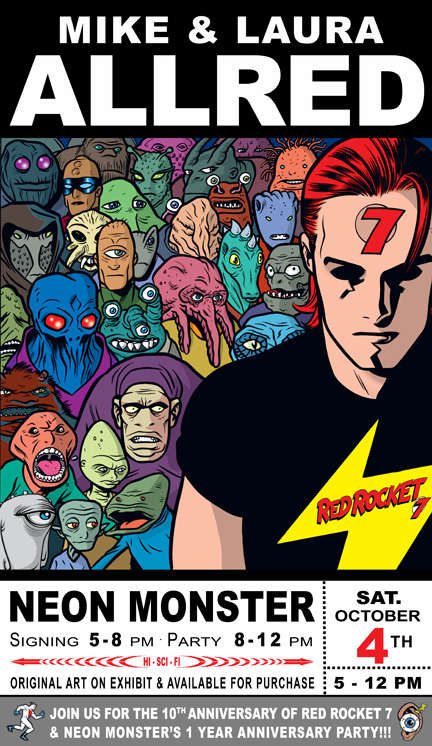 â€œWhile Laura and I have held off from appearances this year, we couldn’t pass up the opportunity to celebrate RED ROCKET 7’s tenth anniversary with our friends at Neon Monster with their own one year anniversary,â€ Mike Allred said. â€œLike RED ROCKET 7, Neon Monster celebrates the common ground between comics and music on a daily basis and the enthusiasm they’re bringing may even surpass our own!”

Neon Monster will be celebrating RED ROCKET 7 in a big way with a traditional signing from 5-8 PM and an anniversary party from 8-12 PM featuring the first ever public gallery showing of Allred’s original art from RED ROCKET 7 and a rarely heard mix of the RED ROCKET 7 album sequel, THE GEAR: SON OF RED ROCKET 7.

The event will also be the debut of the NEON MONSTER ARTIST EDITIONS, a limited edition boxed set containing store exclusives, with the Allreds edition featuring a dozen 14â€ x 11â€ silkscreened prints reproducing art from RED ROCKET 7 in their original black & white state, each hand-signed by Mike and Laura, and a new compact disc pressing of THE GEAR. In addition, all copies of the RED ROCKET 7 hardcover sold at the event will feature an exclusive tip-in plate, also signed by the Allreds.