Bluewater Sneak Peek of the Week 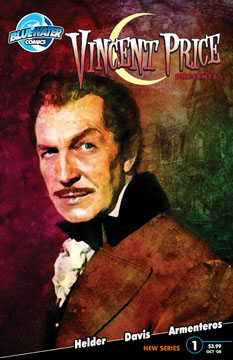 One of classic Hollywood’s most famous scary men, Vincent Price made a name for himself in classic mysteries and thrillers throughout the 1940’s, 50’s and 60’s.Â  Now Vincent Price Presents comes to Bluewater Productions as their 1st ongoing monthly series.Â  The series will feature some of Pricesâ€™s films as well as developing new frightening ones with his estate.Â  Welcome back to the macabre world of Vincent Price.

BARTHOLMEW OF THE SCISSORS #1
Author(s): Chad Helder
Artist(s) Daniel Crosier
Spectral Phantasms have invaded our world. These ghostly creatures from another dimension occupy the human brain and endow their host with spectacular paranormal abilities. Private investigator Gordon Watt, long-aware of the spectral phantasms, investigates a bizarre series of scissor-murders. With the help of a powerful psychic named Jessica, Gordon soon discovers a connection between the phantasms and the mystery of a vengeful, undead boy named Bartholomew. But humanity faces a greater threat: the White Blob emerges from the abyss to colonize pockets of human society. Gordon and Jessica must enlist the help of Bartholomew and the hideous power of his Scissor Swarm or face assimilation by the growing colony of the White Blob.

Ray Harryhausenâ€™s un-produced project comes to life! 1915 France. The Great War rages and a new breed of hero take to the skies. Part bull-terrier, part daredevil, the aces of the Royal Flying Corps’ 5th Squadron are Britain’s elite. It was an era of counter-intelligence, dogfights and drinking songs. But that was before the world changed. That was before the Elementals When a routine mission goes awry, the 5th Squadron finds itself trapped in an unreal world called The Source. Here giant bat-like creatures dominate the world keeping the Universe, and all of its parallel realities, in a precarious balance. But despite its serene appearance, it is a violent, predatory land. Trapped along with Germany’s greatest flying ace, they all must work together to find a way back home.

The epic adventure from Ray Harryhausen & Jules Verne continues while the team is separated on the bizarre Mysterious Island as they try to determine what it is they are dealing with.Â  After being attacked by numerous fantastical creatures they decide to get proactive in their survival and the stage is set for the battle of a lifetime!