Warner Brings Other Into Fight

By Stephen Schleicher on September 2, 2008 6 Comments 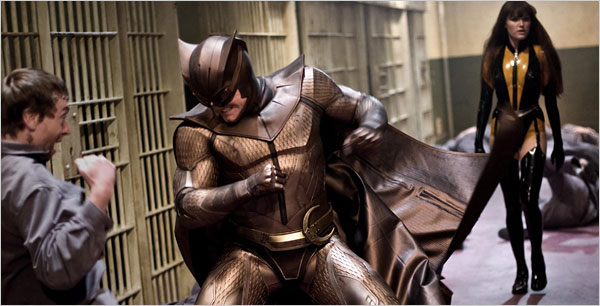 I’m sure many of you have been wating with baited breath on word of the Warner Bros./Fox Watchmen lawsuit in which Fox is trying to stop the release of the film, claiming it still owns the rights to movie.Â  It’s kind of funny when big companies start brawling with one another.Â  When Cox got a slap on the wrist from the FCC for downgrading Internet service for those “exceeding the limit”, Cox responded with, “we’re only doing what everyone else is doing, so why should we get in trouble?”

In order to clear their name, Warner Bros, is claiming Fox sat back while producer Lawrence Gordon shopped the project around from studio to studio with Fox knowing what was going on every step of the way.Â  This is my whole problem with Fox’s claims, too.Â  The company has known for at least a year the film was in production and did nothing at the time, it’s only when the film has the hype machine behind it, and looks to be as successful as The Dark Knight in box office returns did Fox reps try anything.Â  In order to help its case, expect Warner to drag other studios into the fight.

Fridayâ€™s filing makes it clear that not only Mr. Gordon, but also Paramount, Legendary and even Universal Pictures can expect to be drawn into the fray. Universal had tried to make a version of the film in 2001, before Paramount took over. And though Paramount dropped its plans for the movie, it became involved as a partner when Warner teamed up with the director Mr. Snyder in the wake of the box office success of â€œ300.â€

I’ll say it again, someone’s looking for a payday in all of this, and it is the company who’s Simpson’s Movie didn’t do too well.