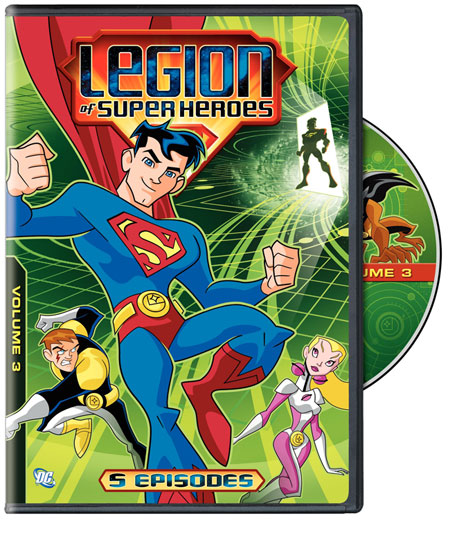 The third volume of Warner Bros. Legion of Superheroes hits stores on September 9, 2008, and features the end of Superman’s time with the heroes from the 31st century.Â  That means it’s time for tryouts!

The audition stars off with The Substitutes, a wacky band of rejects, and a mischievous wizard from planet Xerok who wreaks havoc in New Metropolis leaving only Phantom Girl to save the day.Â  The adventure continues as a new member, Ferro Lad, is inducted into the Legion to help Lightning Lad defend his home from an onslaught of cosmic storms.Â  The action-packed episodes conclude with the Legionâ€™s biggest threat yet: The Sun-Eater, a galaxy destroying weapon of mass destruction.Â  Watch to see which Legionnaire makes the ultimate sacrifice in a grueling battle to defend the Universe and save mankind.

Legion of Super Heroes: Volume 3 will be available on DVD with approx. 110 minutes of five 22-minute episodes: