Th3rd World Studios has announced the three issue Space Doubles series is being collected in trade paperback this October.

“Space Doubles” asks the great sci-fi question–WHAT IS TO COME? With thrilling tales featuring everything from moon landings to zombies in space to existential bug infestations, the answer will shock you.

In addition to collecting all the stories from the series, the 140-page trade features four never before seen stories by Mike Baron (â€œNexusâ€), Dwight L. MacPherson (â€œSurreal Adventures of Edgar Allan Pooâ€), Ben Raab and Deric Hughs (â€œLiving in Infamyâ€) and Andrew Dabb (â€œAtomikaâ€), and two brand new stories from Pickles from Pluto by Brian Smith.

â€œI’ve always been a Science Fiction fan at heart, and at the time I started Space Doubles there wasn’t much presentation of the genre beyond the licensed product. â€¦ I wanted to see something out there that could give someone the same sort of feeling that one would get reading a collection of old SF short stories from PKD, Bradbury and the likeâ€, series creator Scott Closter.

I like what Th3rd World is doing with this collection.Â  Instead of just collecting the stories people have already read, the company is including all new stuff in the book. 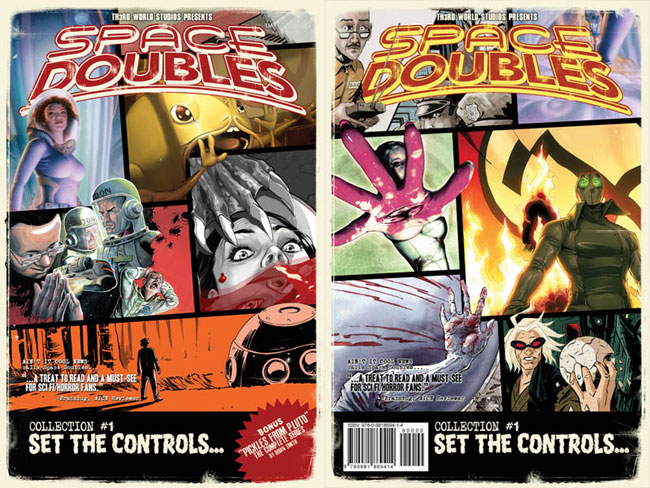