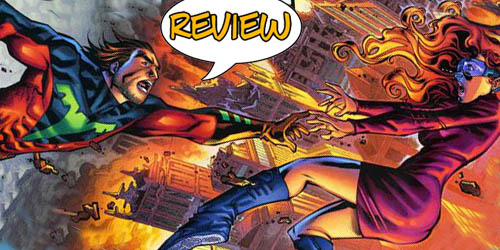 The reviews of the W/KRP “Threeboot” version of the Legion of Super-Heroes have been, to say the very least, somewhat mixed.Â  It’s old-school Silver Age undertones were appreciated by the Legion’s ancient fans (read: myself) but there was enough revisioning going on to draw the attention of the not-so-seasoned Legion readers (that’d be Stephen.)Â  When Waid and Kitson left the book, I was afraid it would devolve into either a series of riffs on the original, pre-Crisis Legion, or worse, would go off on some bizarre tangent that would bear no resemblance to the LSH we’ve spent years reading.Â  Turns out, I was a little bit right, on both accounts.Â  With “Legion of Three Worlds” on the horizon, the monthly experience of this book has turned intoÂ a kind of holding pattern, waiting for the next reboot to come along…

Previously, on Legion of Super-Heroes:Â  The disappearance of Cosmic Boy after the teams long war with

the Dominators left the Legion in a state of disarray.Â  Supergirl was elected leader, but she too left the team (albeit travelling the opposite way in the timestream) leaving the team under the less-than-experienced lead of Lightning Lad.Â  Garth Ranzz is many things, but he ain’t Cosmic Boy, and the Legion suffered through some unsteadiness as a result.Â  Thankfully, several other team members came through, including a mysterious mastermind who has been secretly altering Garth’s commands in the computer system after he gives them.Â  The team has learned to love fake cursing (to the extreme, I might add) and interacted with other heroes extant in the United Planets, mostly by kicking them.Â  Now, contingents of Legionnaires are trapped around the galaxy, and the United Planets has declared them outlaws, putting the team in quite the pickle.Â  Of course, a pickle might make them hungry, and as one of the finest Legionnaires of all time has been heard to remark, you DO NOT want to make them hungry…

We start out on planet Velmar V (Velmar?Â  Rere’s Raggy?)Â as Ikilles and his fellow native Velmarians warily watch as Light Lass awakens from her coma.Â  Shadow Lass and Timber Wolf are trussed up nearby, and Ikilles shows his status as alpha dog by beating T-Wolf while he’s down.Â  With an incredibly annoying series of fake curses, Ikilles talkes about how wonderful it is to have beaten down the Science Police AND gotten one over on the “florg-hammered” Legionnaires who tries to rescue the S.P.s.Â  He keeps pawing at Ayla, and his mate picks a fight…Â  so he has her executed!Â  Looking at the smoldering remains of his girl, Ikilles snorts, “I was sick of her, anyway…”Â  He tries to rip open Light Lass’ blouse, but thankfully the Legion uniforms are resistant to tearing.Â  At the moment, the cavalry arrives, in the form of… Invisible Kid???Â  Lyle does the unthinkable, and calls the savage out, challenging Ikilles to surrender, or get his @$$ kicked.

Halfway across the galaxy, on planet Rimbor, Atom Girl, Colossal Boy, Saturn Girl and Ultra Boy as at the mercy of the Rimborian Science Police, who aren’t pulling any of their punches.Â  Saturn Girl makes a solemn decision, and orders Ultra and Star Boys into the air with the artist formerly known as Shrinking Violet to bust heads.Â  Ultra Boy saves a red-haired Sci-Cop from being smashed to bits, and she moons at him.Â  “I knew you’d save me.Â  My name is Norima.”Â  As U-Boy flashes away into the sky, she murmurs, “I love you.”Â  Shrinking Violet/Atom Girl goes hand to hand with an SP twice her size, and ends up cracking the girl on the head AND scuttling the cruiser, as Colossal Boy and Saturn Girl manage to break their way free of the wreckage below using theirÂ flight rings.Â  Â

Back at headquarters, Phantom Girl and Element Lad arrive just in time to be told by one Colonel Pismo that he’s just shut down the Legion.Â  A quiet young lad steps forward, and helpfully says, “Excuse me, Colonel Pismo, but before you make any more grievous, career-threatening mistakes, I think you should listen to what I have to say.”Â  The lad identifies himself as M’rissey, the LSH’s business affairs manager, who amazingly has the respect of Brainiac 5!Â  While one quiet young lad reveals his inner badass, another quiet young lad does the same on Velmar, as Invisible Kid faces down the toughest squaj (crap, now they’ve got me doing it!) in town.Â  Using his brains, and the laws of physics, I-Kid takes out Ikilles in seconds, freeing Light Lass.Â  I’m an old school Legion fan, and I can tell you one thing most people don’t realize: an angry Ayla Ranzz is like a $*$#ing force of nature, as the law of gravity becomes merely a suggestion, and the entire tribe is shot into the air as if from a cannon.

Back on Earth, M’rissey is equally impressive, telling the SP that not only will the Legion not be a part of the government any longer, but that the U.P. actually owes them over 1.2 QUINTILLION credits for services rendered (with interest of over two billion credits per second.)Â  “We’ll send an invoice… not that I expect the deadbeat U.P. will ever pay us.”Â  M’rissey continues by explaining that the Legion is filing a persecution suit against the government, and that they’re going to try and impeach the Attorney General, who is calling right that very second.Â  The colonel blanches, and M’rissey guesses that the Legion’s lawyers have just stood on their collective necks, and that the P.R. firm he’s hired is ready to release the blackmail photos of the attorney general…Â  The SP’s leave, post haste, and the entire team gapes at his display.Â  As for the squad on Rimbor, they suddenly realize that the transmat portal is open again, and make the leap home…Â  Invisible Kid’s team follows, having squashed their little problem, and the team is reunited just long enough for a woman to show up on the priority line begging the team to help, before the entire solar system is destroyed!

Whew.Â Â Lots of resolution this issue, with Shooter in his best “wrap ’em up, these plotlines are done” mode.Â  The satisfaction of Lyle and M’rissey’s tough-guy moments overcomes many of the limitations of the story, and the art (by Sanford Greene and Nathan Massengill) is well-done, if a bit more cartoony than this Legion incarnation has ever been before.Â  It’s a very strong issue, and had it not come in the wake of the huge sweeping changes hinted for the team after SDCC’s “Legion of Three Worlds” panel, it might have signalled the beginning of a new age for the team.Â  As it is, it’s just a nice signpost before the coming (well, I suppose I can’t PROVE it’s coming, but I suspect that we’ll see a) reboot of the 30th Century.Â  It’s a nice issue, earning 3.5 out of 5 stars, well-above average and nicely done.

For those of you patiently waiting for Phantom Girl, she’s in the wings, I promise.Â  This weekend had a few surprises, including a scanner cable that mysteriously vanished, some unpacking that I didn’t expect, and a visit by old friends that side-tracked me a bit.Â  But, I promise that there are TWO Hero Histories coming, and that I will work diligently to make sure that you see them as soon as possible (ideally, tomorrow and Tuesday, but…Â  life occasionally intrudes.)Â  Hopefully, this will be enough Legion to keep your breath baited for Tinya and a mystery guest.Â  The only hint you’re getting is this:Â  He had some ofÂ the same powers as one of the most decorated and respected Legionnaires, but not for ALL of his tenure.Â  Any guesses?