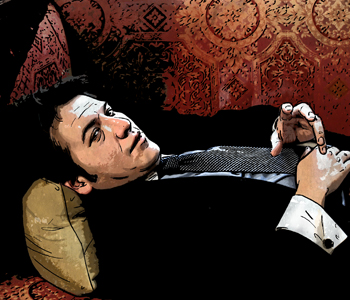 Stephen King’s old material is once again hot, thanks to the things Marvel has been doing with the Dark Tower, and soon the Stand series.Â  Now Simon & Schuster, Marvel and CBS Mobile are joining forces to bring King’s unpublished N. to the small screen.Â  The mobile small screen.

Complete press release and images after the jump.

NEW YORK, JULY 25, 2008â€”Beginning Monday, July 28, mobile phone users and web surfers can enjoy Stephen Kingâ€™s latest work in a groundbreaking series of 25 original video episodes.Â  The series of video episodes was created through a unique partnership between Scribner and Simon & Schuster Digital, Marvel Entertainment, and CBS Mobile and is believed to be the first comic-style book adaptation specifically developed and produced for viewing on todayâ€™s most popular small screen platforms. Starting today, viewers can go to www.NisHere.com or www.simonsays.com to see a preview of the episodes, which will also be unveiled at Comic-Con International in San Diego today at a panel event featuring the creators of this pioneering venture.

The series will also be available for purchase at major online digital content retailers.

The episodes are based on Kingâ€™s original and previously unpublished story â€œN.,â€ the tale of a psychiatrist who becomes the victim of the same mysterious and deadly obsession as his patient, and which will be included in his forthcoming collection of short stories Just After Sunset (Scribner, November 11, 2008) and published as a comic book miniseries by Marvel, launching in 2009.Â  Featuring sophisticated production values, the episodes were drawn by award-winning comic-book artist Alex Maleev, whose work has appeared on NBCâ€™s â€œHeroes,â€ and colored by famed comic-book colorist JosÃ© Villarrubia, best known for his collaborations with Alan Moore. They were adapted by Marc Guggenheim, co-creator of the ABC-TV series â€œEli Stoneâ€ with creative oversight from Stephen King. The episodes are presented in a highly designed â€œpan and scanâ€ format, complete with comic bookâ€“style graphics, an original score, sound effects, and a full cast of voiceovers that includes Emmy and Golden Globe award nominee actor Ben Shenkman.

Stephen King commented: “I’m always interested in new delivery systems for stories and always curious about how those systems work with the old storytelling verities. This one, it seems to me, works extraordinarily well.”

â€œâ€˜N.â€™ combines-cutting edge graphic content with the hot new digital medium for entertainment to showcase Stephen Kingâ€™s unique talent, and we think consumers will be excited to try this never before attempted way of previewing his upcoming story collection,â€ said Carolyn Reidy, President and CEO of Simon & Schuster, Inc.Â  â€œWe are grateful to CBS Mobile and Marvel Entertainment for partnering with us to bring this wonderful Stephen King story to mobile customers and online consumers.â€

â€œStephen King has always been ahead of the curve,â€ said Susan Moldow, Executive Vice President and Publisher of Scribner.Â Â  â€œWith â€˜N.â€™ he has once again proven himself to be an innovator of the first order, offering up a classic, chilling, and compellingÂ  King story in an entirely new format that can reach on-the-go consumers, and keep them coming back to find out how things unfold. â€˜N.â€™ re-imagines the notion of the first serial, delivering prepublication content to where the new readers are.â€

Beginning Monday, July 28, and running through Friday, August 29, the video episodes (each running approximately two minutes), will be released in serial fashion on consecutive weekdays for five weeks, at no additional charge to mobile users, through the largest mobile carriers.Â Â  As an added bonus for consumers, the episodes will also be available on the web through the CBS Audience Network, capable of reaching 92% of the U.S.-based online audience and consisting of online partners such as TV.com, AOL, Microsoft, Yahoo, Fancast, Joost, Bebo, Netvibes, Sling Media, and Veoh as well as Web sites from CBS’s owned television, radio, and affiliated stations, and at www.NisHere.com.Â  Visitors to www.NisHere.comÂ  will also be able to embed the player and episodes on blogs and social networking sites, and to preorder the book.

At the same time, paid download customers will be able toÂ  purchase blocks of 5 episodes for $0.99 or buy a Season Pass for the entire series for $3.99.

A limited-printing collectorâ€™s edition, featuring the book and a DVD of all the video episodes, will be made available when Just After Sunset goes on sale in November.

â€œThe series of â€˜N.â€™ mobile episodes is a groundbreaking moment in visual storytelling, multimedia entertainment, and content development,â€ said Ruwan Jayatilleke, Senior Vice President of Strategic Developmentâ€“Acquisitions, Marvel Entertainment, Inc. â€œThe synergy between Marvel, Scribner, Simon & Schuster Digital and CBS in bringing this venture in entertainment to fruition has been phenomenal. It is only fitting that such collaboration occurs under the auspices and creative inspiration of Stephen King and his infectious storytelling.â€

â€œWe are excited to be collaborating with partners who share our belief that the mobile device is worthy of content made specifically for it,â€ said Jeff Sellinger, Executive Vice President, CBS Mobile. “A project of this scope and scale speaks to the strength and value of mobile as an entertainment distribution platform. We look forward to bringing these 25 unique episodes to our video partners and users, and applaud our partners for creating quality made-for-mobile content.Â  We hope that many will follow their lead.â€