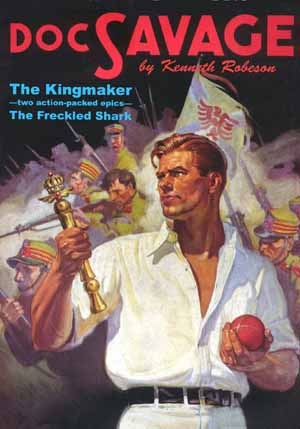 This is probably the best news I’ve heard all day.Â  At the Doc Savage panel, Michael Uslan, the fellow producing the Captain Marvel film, said there was a new Doc Savage film in the works.

Doc Savage is still one of my all time favorite pulp characters.Â  Every time a new comic series was released, or I was able to find back issues of the 1960s reprints, I was plunking down my money.Â  It’s too bad the first Doc Savage movie got the shaft and was reduced to a misserable failure (a story I should tell on a future Major Spoilers Podcast), as it could have been the Indiana Jones franchise.

Here’s hoping Uslan and everyone involved can get the right people on board to make this thing a success.Â  What is needed for that success?

As you can tell, I’m a bit more excited over this news than any other. The Doc Savage film has been in the works for years, and with questions over rights, Arnold Schwarzenegger almost being cast for the lead, and many other fiascoes, have kept this classic character out of the theaters and forgotten by at least two generations.