Boom! Studios has released its schedule for the San Diego Comic-Con going on next week in SoCal.Â  We’ve already mentioned Stephen Baldwin will be making an appearance to sign preview copies of The Remnant.Â  There’s also going to be zombie make up and a Drink Up!/Gay Pride party at the Hyatt.

If you aren’t familiar with the recent issue with Doug Manchester, the owner of the Hyatt and his major donation to support Proposition 8 (only men and women can marry), you can read it here.Â  I say go to the Boom! Party to show your support for everyone.

GET INFECTED!
Make-up Artist extraordinaire John Wrightson will be Zombie-fying anyone that purchases a BOOM! Zombie t-shirt for $20. First come, first serve!

HELP JOSH MEDORS IN HIS FIGHT AGAINST CANCER!
A small advance print run of PULP TALES, will be available at our booth. PULP TALES comes with two covers, a cover art by Ben Templesmith for $4 (JUL083759) and a “donation cover” by Josh Medors (JUL083758) for $10. 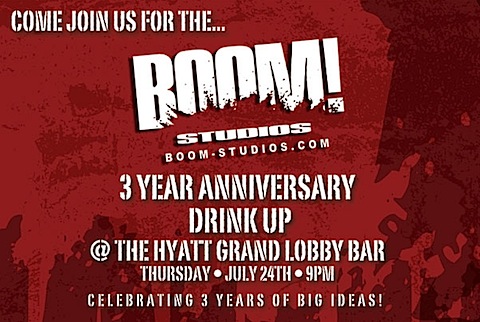 BOOM! 3 YEAR ANNIVERSARY DRINK UP! / GAY PRIDE PARTY
Where: Hyatt Grand Lobby Bar
When: Thursday July 24th from 9 to ??
What : As the sage Brian Wood stated, boycotting only hurts the wait staffÅ  so given that the Hyatt Hotel owner has decided to be a homophobic bigot the BOOM! DRINK UP is now the BOOM! DRINK UP/GAY PRIDE PARTY!

Everybody, come, wave your freak flag high, tip the waiters and we will be taking shots of the party and sending the pictures directly to the proprietor to let him know exactly who his customers are and how much money he looks to lose in the future.

(For those not in the know, a “Drink Up” is just like a “Meet Up” but with people drinking. This will be a gathering of friends and fans, so make plans to stop by and see what’s happening!)