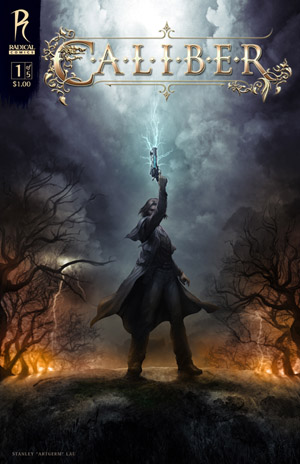 Rumors are floating around that John Woo will direct the Radical Comics adaptation of Caliber.Â  Of course it won’t be official until next week at the San Diego Comic-Con, but hey, now you know.Â  Others are poo-pooing the idea as Woo is in the middle of his three part Red Cliff films.

The Arthurian legend as retold in the American Old West, with all of its great symbolism, magic and spirit of adventure. The Knights of the Round Table are all gunslingers bound by a code of honor to protect the weak and defend the innocent until they are undone from within by their own moral corruption. In this tale, Caliber itself is a tattooed six-gun, given to Arthur by the Indians and imbued with supernatural power. The secret of the gun is that it is never loaded with bullets, but when a man with Justice on his side is holding it, it can fire. When it does, it fires Thunder itself and never misses.

If the announcement is made, it will more than likely be part of a three picture deal Lionsgate has made with Radical that also includes Johnny Depp’s Infinitum Nihil.