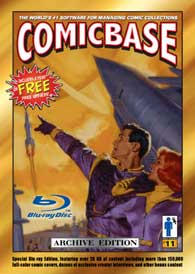 ComicBase, creators of the best database and cataloguing system for comic books out there, have announced version 11 that will begin shipping July 14, 2006. The latest release comes in four different flavors for Windows PCs: ComicBase Express ($39.95), which includes 5000 cover scans and the complete database, The Professional Edition ($129), with over 20,000 cover scans, The Archive Edition ($299), which comes with over 2GB of content, and the newly announced Blu-ray Archive ($399).

Each version has more feature than the previous. Currently I have the Archive Edition (v10), and will be reviewing ComicBase Express in the next few days. Of all of the editions, the one that should generate the most buzz is the Blu-ray Archive. This edition is the first PC based software to be released on Blu-ray disc and includes the companies entire art archive on the 26GB disc – that’s over 150,000 cover scans. The Blu-ray archive edition will also include a quarterly update with even more cover scans. This looks to be the must have edition of the program, but you need to get a Blu-ray drive for your computer first.

I’ll have more on this stoy as the program prepares for launch this week.